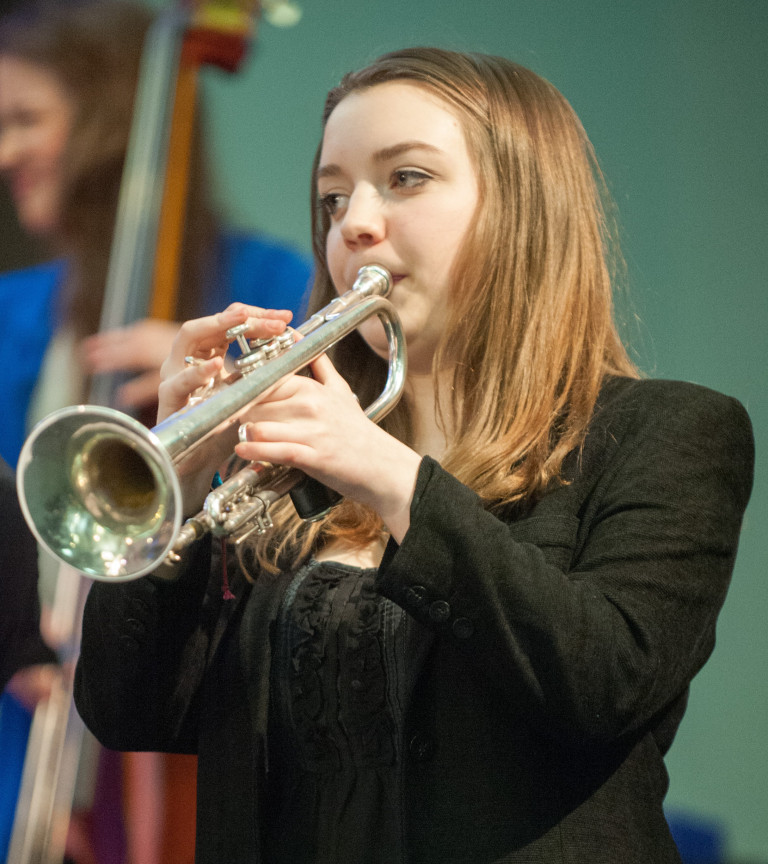 Alexandra has been playing the trumpet since she was nine. At 17, she was the winner of the BBC Young Musician Jazz Award 2016. Later that year she was a runner up in the British Jazz Awards ‘Rising Star’ category and again in 2017.

Alexandra began studying at the prestigious Royal Academy of Music September ’17 on a scholarship. She performs around the country in Festivals, Arts Centres, Music Societies and all major Jazz clubs with ‘The Alexandra Ridout Quintet’ her own band of talented young jazz musicians, NYJO (National Youth Jazz Orchestra) of which she is a ‘chair’ (member),  Clark Tracey’s Tribute to Stan Tracey’s Hexad, The Barford/Stoneman Organ Quintet  and ‘The Ridouts’ a family band. Alexandra is also a member of The Matthew Herbert  Brexit Big Band and has performed with them at the North Sea Jazz Festival, Jazz Middelheim and the Barbican Centre.

Alexandra has had her music played on various Radio 3 show’s, Jazz FM and was the featured soloist on a broadcast throughout Europe at the end of 2016.

In the Dec 17/Jan 18 issue of Jazzwise magazine Alexandra is noted in ‘The shape of jazz to come: who to look out for in 2018’- “Trumpeter Alexandra Ridout was an outstanding winner of the BBC young musician jazz award of 2016 and just keeps on growing as an artist.”

Alexandra has been chosen by Clark Tracey to join his prestigious quintet in its new line up for 2018.